New at Target: Shoes from Who What Wear 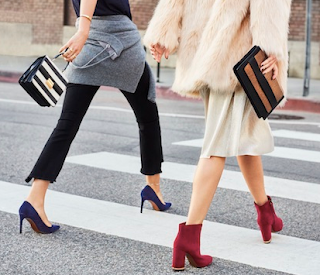 On the eve of their one-year anniversary of its partnership with Target, Who What Wear is launching a shoe collection, with the holiday edition out now. Featuring 25 different styles ranging from elegant booties to classic pointed-toe pumps in velvet and microsuede, the Who What Wear limited collection is the finishing touch on your outfit for every holiday event. Prices range from $29.99 - $39.99, but note this limited-edition holiday collection will only be around for a few weeks, to be followed by new Who What Wear shoe offerings in 2017.
Posted by Target Addict at 6:46 AM 1 comment: 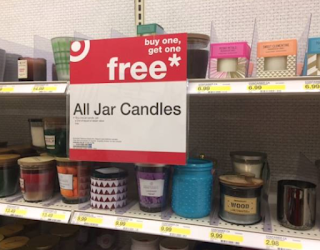 Sorry for the late notification on this (as the sale ends today) but Target has a 'buy one/get one free' promo on all jar/container candles. This is a great deal and at my local store this morning, the shelves were already pretty picked over. This sale also extends online, so if you can't make it to the store today you can order online and still get them in plenty of time for Christmas.
Posted by Target Addict at 12:41 PM No comments: 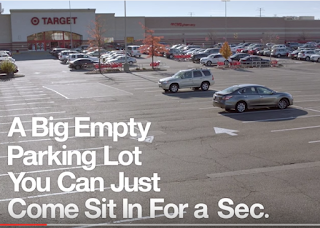 Happy Thanksgiving dear readers! I wish you and yours a happy and healthy holiday. Lots has been written this week about how to "endure" Turkey Day by avoiding certain topics with your relatives and friends. My holiday table has always included people of different political, religious and social beliefs, so for me this is nothing new. But if you feel the need for a little "escape" today, here's a fun little SNL video for you to enjoy :-)
Posted by Target Addict at 8:08 AM 2 comments: 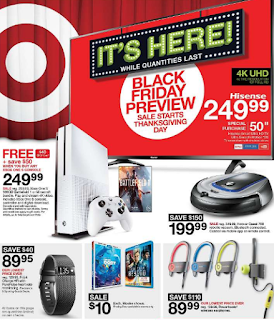 Happy almost Thanksgiving, readers! I haven't had time to post recently, and won't be posting much over the holiday, although I do have something fun to share tomorrow. In the meantime, if you need your Target fix, check out their Black Friday ad here. You can also get early access to select Black Friday deals now (details here) online, or in stores via Cartwheel.
Posted by Target Addict at 6:56 AM No comments: 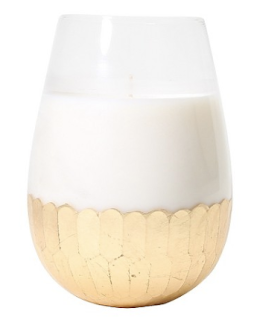 Looking for a great hostess or housewarming gift this holiday season? Then pick up one of these Opulent Candles in a glass jar with a gold base for just $14.99 at Target. This one shown is in the scent "Luxe Linen", but I also saw them in stores in Sea Salt, Bergamot Woods, Fireside Hearth and White Cedar.
Posted by Target Addict at 7:11 AM 2 comments: 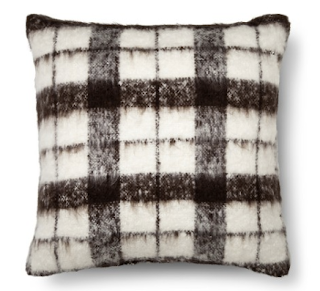 I found this cozy Threshold pillow on a clearance endcap at Target this morning. Online it's called "Mohair Plaid Pillow", and although it's soft and felted like mohair, it's "faux" all the way (which is good as I'm allergic to mohair, wool, and angora). This pillow is extra soft and plushy - not stiff like some of Target's other throw pillows. Best of all, while it's regularly $19.99, I found it marked down to $9.99... but when I checked out, it rang up at only $5.98. Score!
Posted by Target Addict at 5:43 PM No comments: 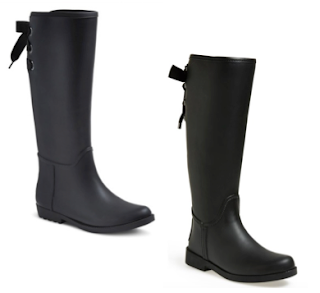 It's time for another double-take, where we take one item from Tar-shay and match it up against a lookalike - yet pricier - designer piece. Today we have two corset-back rain boots. Both are done up in basic black, with a festive lace-up back. But one of them is from Coach and will set you back almost $150 (on sale right now at Nordstrom for $99.99) whereas the other is from Merona (at Target) and costs a fraction of that at just $34.99. Which one is which? The answer appears in the comments section below.
Posted by Target Addict at 12:49 PM 1 comment: 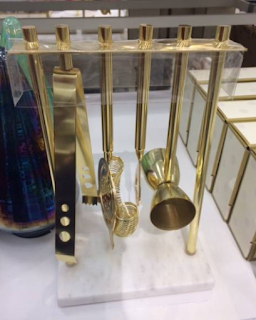 In Target the other day I spied this gorgeous bar set by Threshold. Standing on a marble base, the bar tools hang from a goldtone frame. It'd make an attractive addition to any home bar, and at $29.99, it's an affordable Christmas gift.
Posted by Target Addict at 8:59 AM No comments: 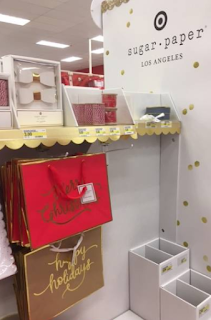 If you liked the holiday giftwrap from Sugar Paper (at Target) last year,  you're sure to like it again this year. This season's selection is done up in combos of white, red and gold, and offers many of the same motifs as last time: jingle bells, grosgrain ribbons, foil stamping, and monogram gift toppers (this year in shiny gold block letters vs. the glitter script letters they had last year). My local store was just starting to put it out yesterday, and prices range from $2 - $15.
Posted by Target Addict at 6:57 AM No comments: 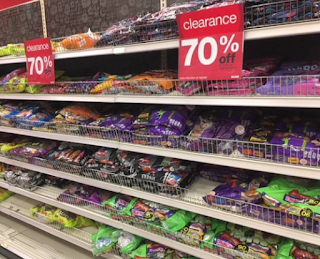 I don't know about you, but my local Target store seems to have overbought on the candy this Halloween. That's why as of today, they still have 2 full aisles of holiday candy "leftovers" at 70% off. And that's just the bagged candy; I also spied several endcaps clearing out the other "pumpkin spice" selection of candy, nuts, cookies, coffee, etc. at 50-70% off.
Posted by Target Addict at 5:09 PM No comments: 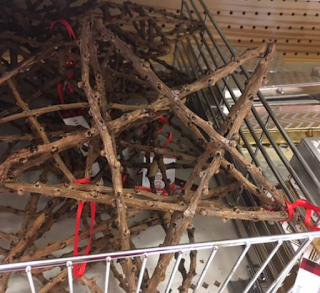 I hadn't visited in Target for over a week, and was shocked today to find that the Dollar Aisle had already sold out of (or moved out) all the Thanksgiving inventory and swapped it over to Christmas merchandise. Sad news if you're still looking for Thanksgiving stuff (like these fun leftover bags) but good news if you're already prepping for X-mas.

One cute home decor item I saw was this twig star, just $3 each. They're a pretty good size (I'd say 6" in diameter) and would look great hanging in a line from a mantle or over a doorway.
Posted by Target Addict at 5:04 PM No comments: 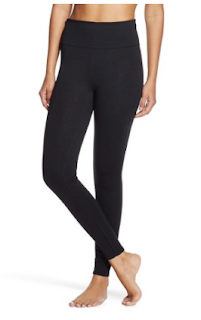 Ever wished Assets by Spanx made leggings? Well, your wish just came true! Assets Ponte Shaping Leggings combine the power of shapewear with the comfort of leggings. The inner shaping waistband flattens your tummy, the opaque fabric conceals, and the piping details visually elongate legs. In size S - 1X, they're just $28 each at Target.
Posted by Target Addict at 6:23 AM 1 comment:

"Black Friday Deals" pretty much the same every year... 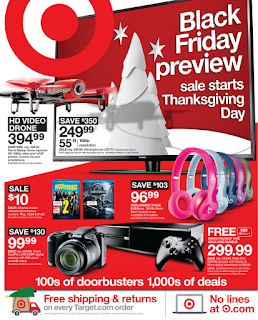 By flipping through old Black Friday sale circulars from Target, Walmart and Best Buy dating back to 2008, The Wall Street Journal discovered that most of the items (and even the prices) don’t change very much from year to year.

A Target spokesperson pointed out the obvious thing: the items appear year after year because people want to buy them year after year. “Our Black Friday ads are intended to showcase the products our guests want,” he told the paper, and the items that they want during the holiday season are toys and small appliances.

That’s why 80% of the items on the front covers of circulars are the same from year to year. Sure, there’s the occasional fad like netbooks or hoverboards, but most of the same items appear at the same prices for years in a row. So compare this pic of last year's Target circular with this year's (due any day now) and see if you can spy any real differences.
Posted by Target Addict at 1:12 PM No comments:

The Look for Less: Topshop vs. Who What Wear 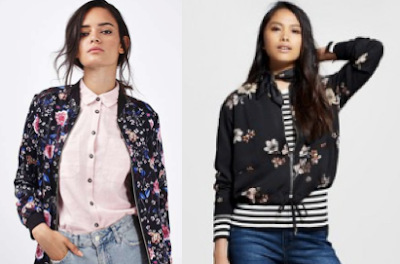 Bomber jackets - especially floral ones - seem to be popping up everywhere this season. With so many options, you could spend a lot - or a little - on this trend, depending on where you shop. Case in point: the floral bomber jacket on the left is from Topshop and will set you back $95. The floral bomber on the right, on the other hand, is by Who What Wear (at Target) and costs just $34.99.
Posted by Target Addict at 7:36 AM 3 comments: 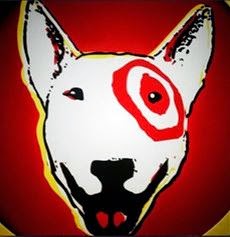